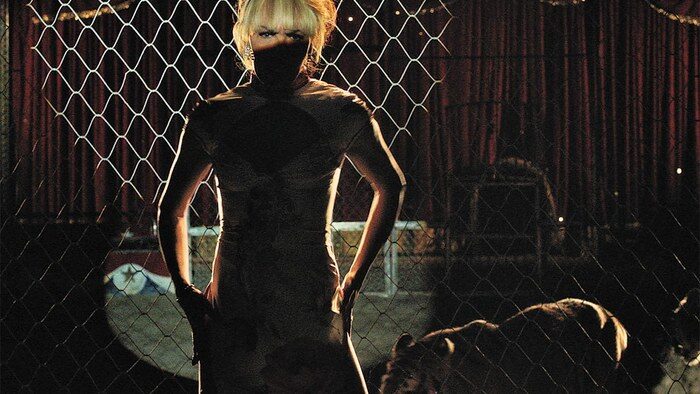 Those chosen to film the apocalypses were not Mayans or the followers of their calendar but two Portuguese nationals, João Pedro Rodrigues and Joaõ Rui Guerra. During the last fifteen minutes of this unclassifiable, mysterious, and hypnotic dream an anomalous event occurs, sweeping the world from all human presence. After this cosmic event, only animals will live in Macao. Why? Nobody will get to know, but that’s of little importance.

This extraordinary film by Rodrigues and Rui Guerra doesn’t belong to the catastrophe genre, but to a characteristic genre of classical movies: a noir film with a documentary tone. Is it possible? The following is a beautiful proof of it.

The opening travelling shot at ground level introduces Cindy Scrash, a travesty diva (and a friend of the directors) as she is about to perform “You Kill Me”, the musical theme from Josef von Sternberg’s Macao; this is actually a playback and the voice is Jane Russell’s, the protagonist of that film. Is it a ghost? This spectral tone overlaps with the unforeseen death of a star during a shooting, someone called Rui Guerra (in general, Rodrigues does the voice in off) who is not representing himself; but his presence is ghostly because he remains off screen almost all the time.

Rui Guerra lived in Macao during his childhood, before this Portuguese colony —“Asian Las Vegas”— was handed back to China in 1999. Rui Guerra’s symbolic map almost never matches with the new territory and his return to Macao comes as a response to Cindy’s call for help, as she thinks a zodiac sect is about to kill her.

The beauty of this film is blatant, as it is the perfection of its formal concept: even a mouse lying down on the road ends up being puzzling. Shots are architectonically precise and the sound design goes far be-yond an accurate representation of the music of a city. Is it necessary to say this is a masterpiece?