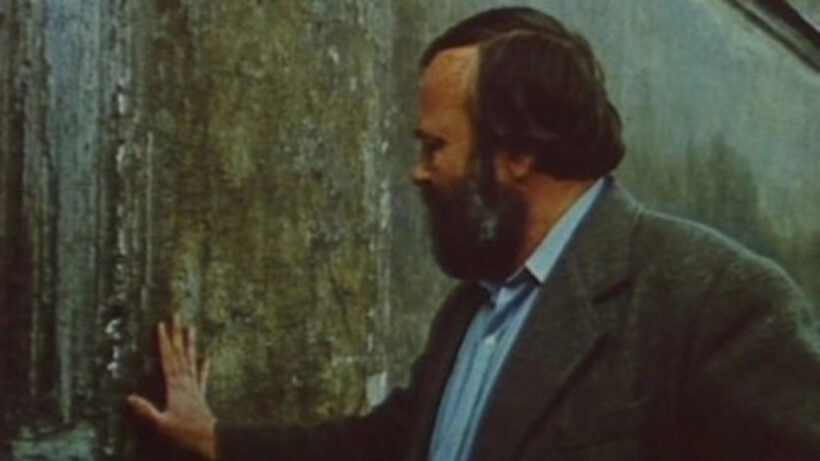 Heaven is infinite, but this doesn’t mean it can offer any certainty of consolation. The opening shot of a cloud-covered sky is also infinite, but this also does not entail any certainty of consolation. The opening shot of a sky covered in clouds—moving fast in the middle of an empty space and going nowhere—offers no peace; that natural trope boosts an existential meditation not without comedy and plenty of poetic passages about finiteness as a radical experience. We have an unscrupulous and humorous scene—starred by the protagonist and some undertakers—set in a graveyard; or a moving passage in which Vladimir grabs a guitar to accompany his singing of a song dedicated to a love from the past. Such are the wonders that give form to this over-three-hour-long lm that could last an eternity and it would never make its viewers weary. It is far too beautiful for that.

Infinitas is one of those pictures in which the logic of the tale reproduces the flow of consciousness. Continuity laws are different and the stringing of time avoids following a straight line, while movement through space knows of no distance. What we see could be a dream, the memories of a dead man who examines his life in order to leave it behind forever, or the conscious work of a man who re-examines his own trajectory; these are movements of the spirit, detached from any schedule or calendar. Except for the amusing opening scene in which Vladimir sells practically all his possessions and abandons the city to take a train and go back to his native land, the rest of the tale is filled with masterfully presented crossing memories which are staged in such a way they have gravitas enough to anchor the film’s hazy plot.

It must also be mentioned that a version of a twenty-year-old Vladimir appears into frame every now and then as a shadow of himself that goes in and out without following a predictable pattern. Either together or “separated,” they visit many places, they go to parties and to the doctor, they see the marching Russian Army. The end of their trip is, undoubtedly, one of the most glorious moments in the history of cinema. However, until now we have only talked about the poetics of its narrative; it would also be necessary to devote a whole different analysis to the general aural concept and the delicate score, which plays a spiritual function rather than dramatic one. After this, is it necessary to say Infinitas is a masterpiece?