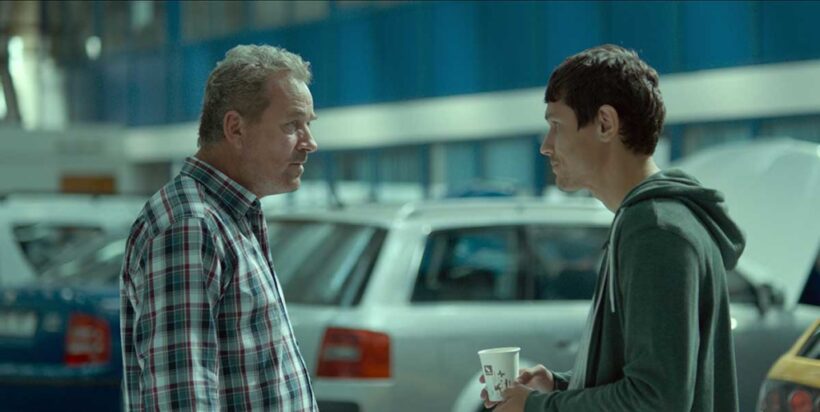 Unlike in Marti, dupa Craciun, what is being explored in One Floor Below / Un etaj mai jos is the commitment to truth, and not adultery. The plot is as simple as a publicity phrase—a man who lives with his son and his wife is in his building staircase when he listens to a couple of neighbors quarrelling. He never actually sees them arguing, but he does listen the issues which triggered the domestic quarrel. Unexpectedly, the young man who was screaming at the top of his lungs walks out his apartment and finds his neighbor, Patrascu, standing there. A little later, Patrascu’s wife calls him—their neighbor, a young woman, is dead.

Patrascu functions as a gravity center where all the signs present in the film converge. The wife, the somnambulistic son, Patrascu’s mother, the suspected killer, the policeman, they all appear, step by step, and offer a dramatic impulse to Patrascu’s inner experience thorn between his commitment to truth and to non-participative distance. The burden of the character’s moral predicament increases after each of his interactions, which is an omen for a growing malaise that will eventually lead to his emotional explosion. At some point, there will be a body combat and this will be a fabulous moment in which we are able to take a glimpse at the reasons why a man can feel and focus in his fist all the unstoppable anger he hasn’t been able to express.

One Floor Below / Un etaj mai jos uses off-screen elements with great mastery and that’s what makes this film so unique. Everything is expressed without the other, or the others, being visible at first. The ambience sounds, the equalization of the specific musicality of a house, all of these elements represent an orchestration of signs which prepares each of the scenes. And though sound does determines what we see, the meticulous score doesn’t entail a lack of care in cinematography, which is just as remarkable as the sound.

There are some filmmakers who still want to film the movements of the consciousness and their impact over behavior. Consciousness remains off-screen while acts are there to be seen—Radu Muntean knows how to film the inner space of moral deliberation.

The story seems simple: two doctors who work in a clinic in the city of Kaili have pending issues they have to deal with in the small village of Dangmai, a place in which the Miao, a minority ethnic group, still live. Chen Sheng will decide to trav- el there to look for his nephew and also to fulfill the wish of his colleague, an older woman who wants to send some gifts to an old friend (and perhaps a lover) she hasn’t seen in some time.

Chen is also a poet and an ex-convict, a paradoxical double condition of which a sensibility stems that permeates the narrative indetermination of the film and some secondary plots linked to the mafia, a past heritage of the main character, and some anecdotes related to a primitive entity that sometimes lurks on the roads.

After the magnificent presentation of the two main characters through a semicircular sequence shot at the beginning, a fragment of the Diamond Sutra will be read, which gives context to this journey through space and time where the story folds into itself as if it were a continuous dream in which there’s a poetic reflection on time as an existential phenomenon.

The mise en abyme (marked by the unannounced dreams) is programmatic, because ultimately it’s about showing the lack of substance of the three qualities of time (past, present, and future), which reaches a climax in a dazzling 41-minute-long sequence shot around Dangmai, a virtuoso sequence that ag- glutinates the whole perimeter of a region and palpitates, second after second, with the whole life of a community. A justified sequence, moreover, because of its philosophical complexity, since in that same uninterrupted segment the boy that Chen is about to look for appears on the scene as a young man and the wife of the dead-for-quite-a-while doctor is reunited with her husband to go to a pop concert on the street. A dream of dreams? Tathagata’s illumined perception of reality?

Be it as it may, the young 26-year-old director exhibits an absolute control of (filmic) space, and an admirable confidence to build a story that scorns linear logic and institutes itself as a dream in verse. Remarkable.