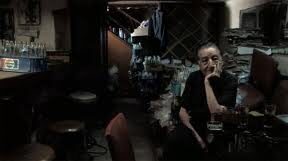 Jean-Luc Godard once said that if the two members of a couple didn’t enjoy the same films, it was likely their love tie wouldn’t last in the long term. Bussmann is the wife of Nicolás Pereda, also a filmmaker, and by watching this heterodox making-of documentary on Malaventura, the much expected feature by Michel Lipkes, Godard’s dictum could very well be extended to filmmaking.

As it happened in Pereda’s Todo, en fin, el silencio lo ocupaba (in here he works behind the camera, as the director of photography, and also as the subject in charge of interviewing the characters who appear in the movie, somehow resembling the film Verano de Goliat). Bussmann shows an alternative path for behind-the-scenes films to follow. One could say the director is posing a hypothesis: a making-of should be conceived as a legitimate and autonomous film genre that can be dissociated from the prototypical “special features” found in DVDs, where assent and condescendence of actors towards the director becomes a speech act correlated to an atmosphere of narcissistic exaltation felt by one and all. This never happens in the set of Malaventura.

In here, actors can’t even remember the director’s name and the obsessive composition of the mise en scène (that’s a quality shared by the making of and the film itself) barely shows the work of the director, who is almost imperceptibly seen on the back of the shot, directing. This is achieved through an exceptional use of the focus length; Lipkes is always shown far, on the back, when not directly out of scene.

“Do you like cinema?” This question, asked by the interviewer to one of the characters, receives a blunt answer: “No.” This is a key sequence, because it shifts the center of the film and alters it course, making it part from the other picture. Busmmann’s film is circumscribed to a specific location of Lipkes’ movie and to a couple of scenes where all actors are elderly people, a sort of forgotten community of habitués of a very old bar in Mexico City. More than actors, they are characters; Bussmann knows this by intuition but, moreover, he knows that their filmed bodies and their faces —in particular— show through their mere presence an array of stories and anecdotes that should surely be worthy of appearing in film.

The reading of the text by William Blake which inspires the title of the film is not only revealing of the loving treatment Lipkes gives to his characters but it also becomes a comic relief: by having several actors read and repeat Blake’s lines of poetry —a strategy that can also be recognized in Pereda’s work— the sordid nature of the scene is turned into an unpredictable comedy. Made with just 24 shots, the solidness in the documental work behind Aquel cuyo rostro no irradie luz sheds light on the secret soul of a fiction film.