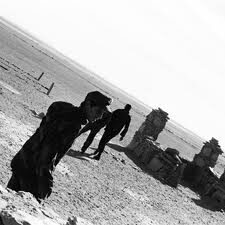 Written History began with Herodotus and ever since those times most of its narratives are related to war. Likely, most of us now next to nothing about the Saharawi Arab Democratic Republic and its 1976 independence; unless we are professionally following on the steps of the First Historian, or if we are sensitive film- makers such as Pierre-Yves Vandeweerd who closes his trilogy on this conflictive Western-Sahara region —once a Spanish colony, today mostly occupied by Morocco— with Territoire perdu.

Casually and causally, in a recent festival the remarkable Mexican film El lugar más pequeño shared the main awards with this no-less-outstanding film by Vandeweerd. As in Tatiana Huezo’s film, the Belgian director films just the faces (and the hands) of those in charge of reconstructing the memory of a massacre. Also, the director establishes a perennial link between the desert, the camels, and the people. That’s why out of the seven testimonies presented (some about past atrocities of Mauritanians and Moroccans in spite of the 1991 cease-fire; testimonies of torture, rape, executions and explosions) the story of a desert guide is the most visceral, ancestral. It is as if it revealed a specific ontology and a (natural) right of self-determination.

El Hisam, a 2,400-kilometer wall built by Morocco to establish a limit between the occupied territory and the Saharawi land is a defining point in the staging of this film. The Super 8mm camera is placed 78 km, 97 km, 11 km, and finally 400 meters away from the wall. The old guide, a man who knows the art of silence and is able to recognize the sounds of stones, plants and wind currents informs us that at the other side of the wall there is a holy site of pilgrimage which nomads used to visit to honor their ancestors. Today only camels walk freely through that division and at the occupied side Saharawi youngsters are illegally stopped and arrested by the police, regardless of their actual participation in the Intifada, the resistance. They are not yet “people from the void,” an expression that used to refer to the invisible presence of the departed and later meant people disappeared by police forces.

In the last sequence, as well as in the first, camels are central. Their cries seem to paraphrase an old saying by Herodotus: “That which is not good for men, cannot be good for camels either.”

The Other is the enemy, the threat; not just in a specific war scenario, but within a paranoid and nationalistic worldview where the Other is the one who penetrates into the fatherland and unsettles the wellbeing of a nation. This is a contemporary dimension of war. A filmmaker’s statement: “a person is utterly irreducible to the social and racial representations that are made of him or herself”.

That statement was written in a beautiful and long letter sent by Sylvain George to make up for his absence the day he was to receive an award for Best Film at the last BAFICI edition, in April, 2011. This letter was a synthesis of his extraordinary film May They Rest in Revolt (Figures of Wars I) (2010), a documentary denouncing the impunity of those who hold power. After a three-year registering period, George films the lives of the African migrants trying to cross across the English Channel from Calais in order to get to England. George’s camera “travels” with them. We see them as they shower, sing, flee, sleep, eat, laugh; an unforgettable scene –men living in despair burn their fingerprints in order for the French police not to identify them. Throughout the film, George proposes a dialectics between nature, animals and men, reinventing the documentary genre and revealing a well-defined battlefield not recognized as such.