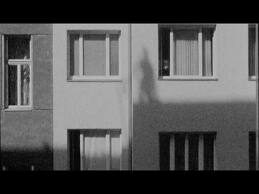 Deleuze and Foucault readers will quickly recognize some of their theses illustrated with great precision in this lucid film essay by Michael Palm. Indeed, “societies of control” and “bio-politics” are no longer ideas conceived by brilliant minds of the past century but a normalized 21st-century practice which Palm shows in his film in a structured way: everyday movements in the subway or the street, the mobility of a fetus, the microphysics of brain activity, medical practices, all of these are subjects to control and the camera is an instrument that promotes the old jail-observation system known as panoptical. Everybody knows he or she is being watched, everybody internalizes predictable behaviors in face of an omnipresent eye disjointed in different locations and deprived of any reference. Thesis: we live in the order of total visibility.

One of the chapters, “Tolstoi’s Machine,” reveals how behavioral abnormalities in the public space can be predicted. Thus, behavioral dissidence invites to suspicion and from this derives that presumption of innocence is being substituted by virtual guiltiness. Palm combines surveillance-camera images with remarkable images (most of them open shots) of life in the cities with their morphology of buildings, as some alleged sociologists and physicians talk about what we see and about what we don’t see too. The image possesses a semantic excess –some would say—and we see in it just what we can. The sound design underlines the opposition between a utopian universe as presented in some fictions of the past and our own dystopian reality.

The starting point is a piece of sociological evidence: the end of certitude implies the institutionalization of fear as a blueprint mood that facilitates a discreet and yet efficient and pervasive militarization of public space, and also of our intimacy, to a certain degree. Orwell’s famous 1984 and its Big Brother are part of an old narrative, today the «Little Sisters» are the ones watching us at all times, even when we go out into the woods.

Pedro Costa once warned about portable cameras and the implicit message they carry as a sort of secret imperative forcing the user to move while recording. Between October 1993 and March 1994 —just before that false manifest known as Dogma 95 appeared with its obliquely cynical attitude and a fakeness that would lead a whole generation of young filmmakers to understand this movement as a synonym of (dirty) realism and libertarian cinema— a Spanish sailor named Luís Lomba, AKA “O Haia,” who was probably just as narcissistic as his Dane peers, discovered cinema on board of a ferry in a route circumscribed to Romo (Denmark) and Sylt (Germany). He filmed without lights and no other furniture than the one already present at the site of his scenes, he used no script and a cheap camera; but luckily, he was no follower of Lars von Trier and his chums.

His footage might seem dull, but Xurxo Chirro performed an extraordinary edition job (the director refers to it as ‘manipulation’) extracting, finding and composing a great film out of 15 hours of footage re- corded by Lomba. Why does Lomba film? Why does he film himself in his everyday life? Why does he favor those extraordinary fixed medium and open shots? What does he find in the repetition (of shots)? There are no answers here.

Chirro organizes his material in chapters (the final credits signal an appreciation for Herman Melville’s work), but the images we see follow no chronological order. There is no pretention at establishing a classical narrative. The division is actually there to part sets of everyday situations: daily chores, times of celebration, and Lomba’s double fascination with himself as the object and subject of the recording and with the sometimes-frozen and sometimes-rough sea. There is a peculiar dialectic between Lomba’s compulsion to record himself (a disposition which includes the few and almost equally eager fellow Spaniards on the ship) and the mild embarrassment and discretion shown by the “Vikings” of the crew (who, for obvious reasons, constitute the majority). But beyond cultural traits, the panoptic everyday presence of the camera as an omnipresent mechanic eye recording both public and private affairs can still shy out the subjects of this involuntary representation. However, such a sociological hypothesis is not enough to understand the great mystery and cautious love for cinema shown in a film bound to stir passionate discussions and never to provoke indifference.

Both films belong to the official competition of Ficunam 2012.