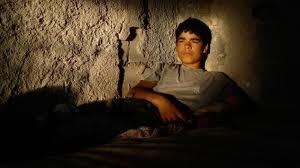 The opening shot of Yatasto shows the beginning of a world. Darkness prevails for a few seconds until the fire —slowly beginning to heat the morning’s yerba mate— takes over. Ricardito and his pals rose early. A day as many others begins and instead of putting on school uniforms the film’s characters put on t-shirts, feed their horse, and get ready for a long journey of scavenging. On top of their cart, they set out on the search for their daily bread. Where some see only thrash, others see a commodity.

But not everything is just work. Destitute people also rest, play, and dream. Yatasto unveils the inaccessible experience of the poor. A dignifying portrait, the film finds the precise form and distance to avoid showing poverty as natural when it should always be considered an anomaly. Thus, this unveiled micro- cosm becomes comprehensible through a register system in which the lack of social mobility is portrayed using a double formal play destined to detect it: a paradoxically fixed travelling camera (it is set upon the cart) and the obstinacy of medium shots, almost always with a fixed camera and a strange low-angle shot. The characters don’t move forward, there are no horizons.

And that is why the supposed trip of the young protagonist, Ricardito, who at the end of the film says he went to Santiago del Estero together with his father, is essential. Mobility, tourism, voyages of discovery, those are all privileges to be lived by others who dwell within a specific realm of economy. In that sense Ricardito’s (un-real) trip —and even his ironic remark when saying he was at a place where there isn’t even cell-phone reception coverage— is an extraordinary and enigmatic closure, instead of just a comment by the protagonist. It is an image of our lives, in negative.

From the aerial and impersonal panoramic shot that opens the film to the utterly personal shot —a panoramic subjective— that closes it, the protagonist of this trip into a minimalist heart of darkness acquires a knowledge only to be obtained after the radical experience of loosing one’s center: in spite of a secret arrogance that presents the point of view of a particular culture as universal, all cultures are but one among many.

The debut film by Zabeil, co-written with starring actor Alexander Fehling, is set in an unspecified location in Africa (though it actually is Botswana). A young man begins a journey without any specified destination, just sailing a quiet river on a canoe. As he relaxes and takes naps, a native is in charge of the vessel and also of fishing and protecting the young man so he doesn’t get sunstroke. Cordiality and cu- riosity are the prevailing feelings between them. When night falls, the native tells him they are in a land of wild beasts and they could get attacked even by an elephant, since their presence there could be perceived as a threat. The German man reveals his profession and, as the actor he is, begins imitating the sounds of the elephant. Next morning arises with a surprise: the actor is left to fend for himself in that wild territory.

The work made to convey his audiovisual perception is extraordinary: wild life is not always openly revealed but mostly heard; general shots underline the loneliness felt by the character and several night sequences generate a primitive feeling of anxiety produced by the lack of any symbolic protection. Zabeil’s use of the ellipsis to solve situations of suspense is superb and he also chooses well his scenes in order to show the secret change experienced by the only European in a tale where white man’s rationality is not enough to interpret the language of the others.

Both films belong to the official competition of Ficunam 2012.