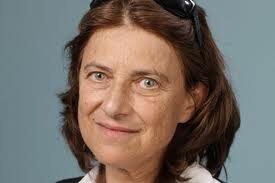 At least until the 20th century philosophy was written —and so were many other areas of endeavor of our species—exclusively by males. After only 115 years from its creation, filmmaking is still living its childhood, not even its youth. And cinema has also been a predominantly male praxis. This patriarchal evolution of cinema was not caused by a genetic imperative. The open nature of filmmaking is as indifferent to gender issues as to the notions of national and ethnic filiations.

Chantal Akerman is a woman and she’s been making films since 1968. She debuted with a powerful and enlightening short film starring Akerman herself, Saute ma ville. The film shows a teenager coming back home. Before taking the elevator, she checks if she’s got mail and once she’s inside her flat she walks straight to the kitchen to cook pasta; she eats it and drinks a glass of wine before messing the house up. She then puts on a waterproof jacket and polishes her knees with polishing cream. She reads the paper and throws some sort of cream on her face; she looks at herself in the mirror. She sets some flowers in fire and allows the gas to flow out from the stove to end it all. A few seconds later, there is a fade to black and we hear an explosion. The end.

Is this a film made out of whim or is it a psychological revelation? Is this a premonition of a filmmaker’s obsessions? Saute ma ville announces the exploration and representation of several different domestic fronts: loneliness, psychic instability, suicide, self portrait, the human face as the preferred requirement for the eye of the other (both the one filming and the film viewer). However, the pleasures of the body are not announced here yet nor the confrontation with a radical otherness. And though the spirit of this short film is somehow experimental, a certain formal search remains latent; though in Hotel Monterrey (1972), Akerman proved her versatility as a filmmaker and her lucid understanding of the mise-en-scène: she can pass from fiction to documentary without blinking and always moving in new directions. If these two films were not signed, it’d be hard to guess the filmmaker responsible for A Coach in New York —a quietly brilliant light comedy— is also behind Jeanne Dielman, 23, quai du Commerce, 1080 Bruxelles, a true master piece in its own right.

Akerman is also a writer and a installation artist. Her installation art is sometimes related to her movies, transforming the themes she already hinted at in her first short film. Jeanne Dielman, 23, quai de Commerce, 1080 Bruxelles shows, precisely, a radical view over domestic life: a discreet dictatorship, an eternal recurrence to the same situation on the absence of any creative gesture that could limit the repetition of lost time. Mrs. Dielman seeks to find shelter in a deliriously compulsive existential method: to tidy up over and over again, exorcising the anguish that devours the soul and paralyzes any sudden access to pleasure. A mother and a whore, Mrs. Dielman will remain petrified when her rituals loose their effectiveness for a moment.

This is Akerman’s most Bresson-like film, not because of its minimalism but for its narrative and formal devices that aim to expel everything that might be unnecessary. The ending and the final shot are simply memorable: Dielman sits completely lonely in her house, seen through a fixed medium shot. (She is alone, as usual, since even when she walks on the street no one seems to be there to confirm her existence). Some times, an ascetic form can convey the matrix of an emotion through the most minimal expression and Dielman’s feeling of infinite loneliness and abandonment simply couldn’t be perceived by anyone as an impalpable, immensurable experience. The last shot of the film seals an aesthetic achievement that proves the material power of cinema.

Akerman, as we said, is a woman, a filmmaker, and we should also add that she is a female filmmaker of Jewish descent, the daughter of Holocaust survivors and a person who is very aware of her own tradition where the image is a problematic issue in theological terms. But why does she film then? Most probably, during the years she spent developing her craft, she found the magnificence and dignity of the human face on the screen. Because the invention of close ups showing faces is not something to be taken lightly by a Jewish filmmaker who —as the philosopher Emmanuel Lévinas realized— sees in the encounter with the face of the other an ontological responsibility that determines the way we stand in this world. And that is the source of the dignity of the faces shown in her films, like the faces of people who don’t belong to the white elite; or those of the illegal aliens in De l’autre côté, her most relevant film for Mexican nationals.

Serge Daney said, talking about the premiere of Toute une nuit: “Chantal Akerman used to write to us frequently. She’d write her address on the envelope (Jeanne Dielman, 23, quai de Commerce, 1080 Bruxelle, 1975), she’d film (Je, tu, il, elle, 1974) and communicate her personal newscast in English (News from Home, 1976), she’d even arrange a date (Les rendez-vous d’Anna, 1978). Letters would reach their destiny and some would throw them right into the thrash while others would read them passionately. I was part of those «others».” And the writer of these lines is also part of those others who read and watch Akerman’s films with passion and enthusiasm. She is an irreplaceable filmmaker that maintains a sovereign freedom as it is proved with the extraordinary prologue of her most recent film, Almayer’s Folly, a new expedition into the living territory of the others.

This tex has been published by Ficunam 2012 (Catalogue)