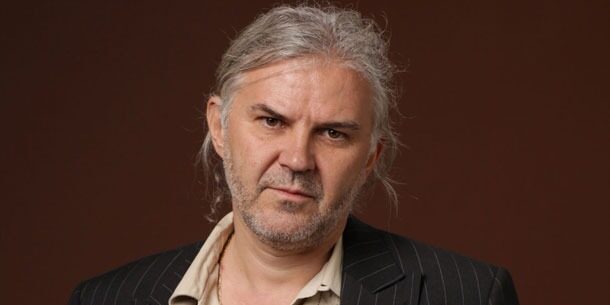 MICHAEL GLAWOGGER / DISAPPEARANCE IS AN ERROR

For the past 24 hours I’ve been trying to remember where we were flying from, but I simply fail to recall. Our destination was Vienna, that much I know. It was a relatively small plane, I was among the last people to board, and when I got to my seat, Michael Glawogger was sitting there. He had his legs sprawled over the second free seat and a cigarette pack out ready for when getting off the plane. «I’d thought boarding was done», he said, smiled, and tried to stand up without bumping his head. «Stay, if you want», I offered, but he’d already thrown a half-inflated black pillow on to the seat behind us, next to where his friend was sitting. «Thank you for not letting an old man rest», he jokingly quipped once I’d settled into the luxurious space which was all mine now. And I did buy my way out of this «guilt» later on with my snack pack of peanuts which he wordlessly accepted, and with a stiff neck from chatting with him the entire flight.

I did not know Michael Glawogger anymore than I got to know him during those hours – or at the several occasions when I interviewed him for his films. And yet, to many of us it feels like we knew him much better than we’ll never know others.

That’s also due to the fact that, when Glawogger spoke, he was your friend. He was open, accessible, generous. He spoke enthusiastically, it was contagious, and every time, his eyes were flickering with a mixture of playful bellicosity and impish smile. I can’t even say that was only true for when he spoke about his work because that sparkling energy was also palpable when he got angry or serious, addressing economical, political, social – or Austrian dysfunctions, for example. Or when he demanded an even extra-extra snack pack of peanuts.

Glawogger was ready to tackle things, but not only for himself. During the times when he was a member of the film funding / appropriation committee, he made some projects possible that others had written off. As somebody who was impassioned by film, he worked for other directors as well, behind the camera or writing.

Lately, he’d been wearing his hair long, often in a ponytail, and he liked it when we complimented him for looking a bit like a cowboy that way. «That sounds way better than provocateur», he used to say, and: «I consider myself more a gypsy, though.»

On December 3rd, 2013, Glawogger departed for a one year round-the-world trip in order to make his next film. Or whatever it might be. He was travelling with a very small team, in an old red VW bus because they figured to «find spare parts for it even in the remotest parts of this world», in case it broke down. The trip had led him to Eastern Europe first, and then to Africa. His last stop was Harper in Liberia, where he contracted Malaria Tropica.

Michael Glawogger died in the night of Tuesday, April 22nd, after hospital treatment in Harper and Monrovia had turned out unsuccessful, and before he could be brought back to Austria.

I don’t know why the news of his death upset me that much. I was in no way prepared for how much it would shock me. It confuses me, and I was touched to read the note my dear friend Roger Alan Koza wrote yesterday. At one point, he refers to Alexander Kluge remembering his friend Heiner Müller. I read about Kluge’s speech for Müller’s funeral earlier somewhere else, and Roger brought back to my memory Müller’s quote: «Death is an error. It’s an error that the dead are dead.»

I want to turn this quote into a defensive spear now and throw it at – I don’t know who or what. «Death is an error!» Because it is.

Glawogger kept a diary from his trip, which he published online with an Austrian and a German newspaper and where he wrote in 3rd person narration about the things he experienced, the beauty or the horror he saw and the process of constantly learning still. He also wrote about the heat, which «infiltrated his limbs and coated his conscience, burying all his will and all his want under a thick and heavy blanket. He was tired.»

One of his last entries dates from April 18, and that was when he was first experiencing the symptoms of a disease. He wrote:

«When he was still a child, he used to think: But the world is so big. – He could not imagine how, for example, a wanted criminal should not be able to hide anywhere where he could not be found. … It was not for he himself had committed a crime nor did he intend to. But the possibility of disappearing was alluring and comforting in its abstractness. Then he would lead his life somewhere else, with a different routine, different trouble, and a different sense of time. With some venturous pain and lots of unimagined luck.»

Glawogger was adventurous, and in his work he was moving along the line between fiction and documentary. But, above all, his films were infused by his curiosity. If curiosity is a key element in the concept of «living life consciously», it is probably an essential trait in a filmmaker as well. Glawogger had it. Also, his films display an empathy which defies any attacks, and they are devoid of reproaches. Glawogger never sugar-coated facts, but neither did he promote a cause. If there are filmmakes who want to tell their stories «as realistically as possible», in his documentaries Glawogger aimed for a deliberate mystical aesthetics to sharpen reality to a point which allowed him to access what lied beyond which could easily be seen.

He described himself «compelled to discover new things», and he was drawn by exotic places. He was very much interested in how people lived in different parts of the world, but also in how they managed to live gracefully within adverse conditions.

In «Megacities» he ventured to explore the causes and effects of poverty, and he seeked to learn more about the human ability to improvise and assimilate in the most improbable situations in his following documentaries as well. «Workingman’s Death» and «Whore’s Glory» later came to form what’s now called his «Trilogy of Working Realities», and the concept of, the right to and the (personal, identifying) need for work is the recurrent motif in Glawogger’s films. His current project was entitled «Film without a name» and its core engine was that Glawogger had no idea nor concept of or intention about what it should become. «Maybe it won’t even be a film», he said, but he knew at least there he’d be wrong.I still don’t recall where we were flying from, but I remember how Glawogger seemed a lot less tired from travelling than me.

«Harper, then, was yonder place where he might be able to hide forever, finally», he wrote on Friday.

«There, in the remotest corner of West-Africa, he found himself at the end of a gory civil war, and at the end of a dream. He awoke to a playful-like grand air: spacious and bleary, at a nearly unspoiled beach. Harper is not easy to access and no one, let alone some too neatly dressed Pakistani UN-officers have any reason to come here. ….

He ascended the stairs to a decayed mansion and from the remains of a balcony delivered a speech which nobody wanted to hear and no one understood. A young woman who was carrying a mayonnaise glass filled with gasoline stopped at the crossing not far from the house and turned to smile at him, while he continued bringing forward his concern, not far from resembling a lunatic: ‘Please hide me. Give me a room in one of your large homes, from where I can look at the ocean. Cook palaver soup for me and keep talking to me until I understand. And, please, let no one know that I’m here. Until I’ll have been here long enough, and disappeared completely.'»

Death is an error and disappearnce is, too.