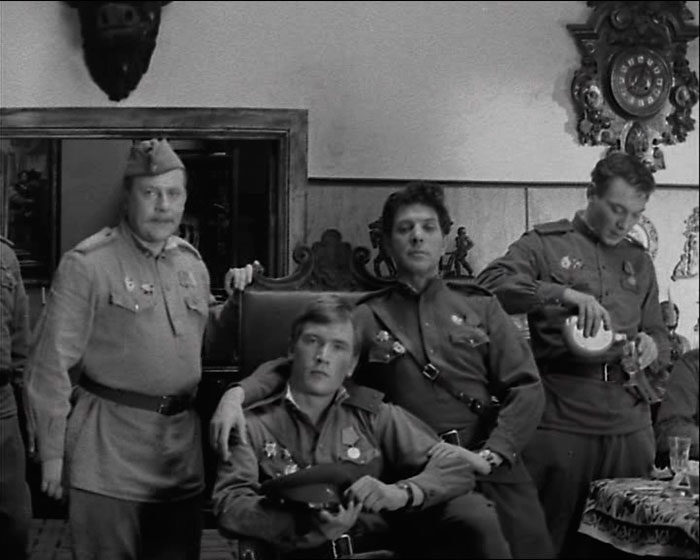 A preamble of horror in 7 minutes—airplanes fly over cities dropping bombs on their populations; soldiers shooting from windows of ruined buildings or running with guns through debris- filled streets; explosions everywhere pulverizing the public space. There’s nothing more heinous in the whole 20th century than WWII. But, in strict terms, true heinousness will appear a little later, at about one hour into the lm.

After an ominous introduction, comes its opposite. A group of Red Army soldiers take a break and relax at a German farm. War is over and the soldiers laugh, feeling relieved and cheerful. Unconsciously, these privates are obsessed with the German woman who lodges them. The mere joy of living the moment without having to worry about the enemy is undeniable; images don’t lie. However, one night the whole platoon goes out patrolling and they find the architectonic aftermath of fear. A concentration camp is still standing, empty, abandoned; but the rationality applied to mass murder can be read in each of the shots chosen by Khutsiev to visualize his characters’ consternation. Not much after, some country dwellers—who haven’t lost hope to find their arrested relatives—will appear in the scene. The humane quality of those passages shines for its dignity.

Here, Khutsiev is simply great. The lucid and solidary dialectic established between archive material and fiction reinforces the gravitas of each image, dismissing indifference and equanimity. War films, when they are good, reject any trace of satisfaction in relation to the war enterprise; that is, they do not worship militarism under any form. It Was the Month of May is one of the greatest films within the war genre, as it even warns—in a surprising ending in which stock material from the postwar is used, once more—about the relation between war and the economic system, stating the greatest risk for historical memory—to transform hideousness into a museum piece.