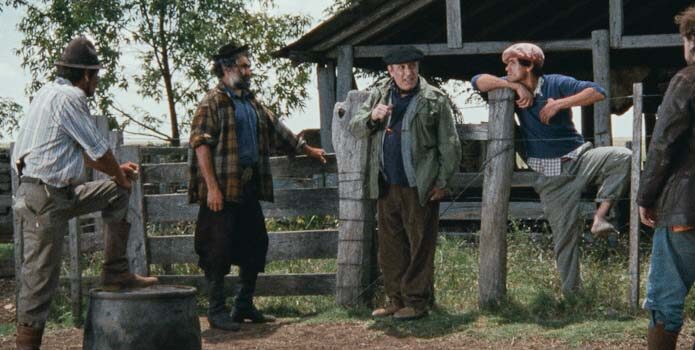 At the beginning of the film, an open shot shows a deep knowledge of the (filmic) space and time occupied by the char- acters. The symbolic space is Montevideo, first, and then Salto; the character is Ariel Cruz, a young militant with some neurological issues which do not render him unable to interact with the world around him and to think about it.

The tale begins in the capital of Uruguay at a university taken by the students. The 2001 crisis did not happen in Argentina only; people in Uruguay also went through a crisis of their own, though they didn’t face the hyperbolic madness of having five different presidents in less than a week. The situation is one of emergency: taken universities and stopped factories. Within this dramatic context Ariel will have to face another —and more private in its nature— drama; the loss of his father, whom we never see but who is always present through Manolo Nieto Zas’ remarkable use of off-screen action: his debtors, his friends, his neighbors, his dogs, and his properties turn him into a ghostlike presence.

The place of the son mentioned in the title of the film stands for conquering the place of the father. Ariel is now responsible for the administration of an inheritance which gives him a hard time with reposses- sions and cranky debtors who try to take advantage of the situation. But this is not the main worry of the character or the point of view chosen by Nieto. Ariel has to make an effort, as he has always had, to deal with his genetic inheritance: to light a cigarette or to walk are almost feats for him. Thus he is a militant not just in political but also in physical terms.

This film stand on the basis of the formal choices it features and on the presence of its unforgettable leading character. At moments, the film is also a tragicomic portrait of young militants and the impoverish- ment of workers’ movements, which stand in contrast to the strength of the countryside men and even the main character, capable of undergoing a hunger strike for the sake of the workers at a cold-storage plant. The mystery of the film lies on Ariel’s behavior: his own pace lays bare the cowardice of the spirits surrounding him as he keeps on living and running away from the general despondency around him.