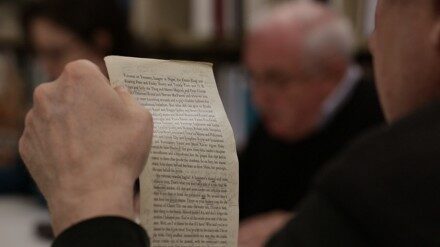 ‘Sculpting in time,” that was Tarkovsky’s way for describ- ing cinema. Without the meta- physical density of this Russian filmmaker, Dora García’s first feature manages to prove the meaning of that phrase within a secular context and with charm- ing lightness. Here, we literally see sculpted time. Somewhere in Zurich, a group of book lovers has formed an open and trans- generational society devoted to the systematic reading of James Joyce’s final book, Finnegans Wake. They get together once a week and read segments of it; and, if Joyce professed to exhaust language, these lovers of literature and festive priests are ready to figure out 70 possible meanings per each word in a hermeneutic mission which although pleasurable and inspiring is also endless. More than academic this appears to be a therapeutic quest and even a religious one, though humor and irony dominate in these readers’ personalities (there is a very good joke about the Argentinean Pope). García transforms her camera lens into a perceptive observer able to follow the read- ing sessions without any further intervention. A few open and medium shots on a bronze sculpture of the writer in a snowy landscape, as well as a couple of relevant comments by some of the older members of the group, are chosen as pauses which put into context this almost-religious practice. Joyce might be a patrimony for intellectuals, but The Joycean Society is essentially a film for regular folks.

The Poor Stockinger, The Luluddite Cropper and The Deluded Followers of Joanna Southcott, Luke Fowler, UK, 2012

The dialectic, an unresolved, chore of this audiovisual es- say on a specific period of the concrete and conceptual work developed by extraordinary Brit- ish historian E.P. Thompson is ordered through two antithetic visions about the function of knowledge and the pertinence, or lack of it, of adult education. These two views are represent- ed by the Marxism of the author of The Making of the English Working Class, and the English Liberal orthodoxy. Emancipation or tolerance? Objectivity or agitation? Using stock material and current images of the many universities and cities where Thompson taught within the context of the Workers’ Education Association, readings of various reports on the lessons he gave in the 50’s and the 60’s, and his famous statements in “Against University Standards”, Fowler reconstructs a historical period and a past struggle of English society which is universal within its own particularity. “London is also part of human condition,” said Thompson to explain a poem by Blake. And though Thompson’s discursive preci- sion is superior at moments to Fowler’s disheveled and even whimsical register, this is no impediment for some truly forceful shots, especially on exteriors. The soundtrack tends to create a unique atmosphere ranging from the intonation chosen for these readings to scattered fragments of mysterious sounds and recognizable musical pieces. An avant-garde poetics, a non-conformist film.