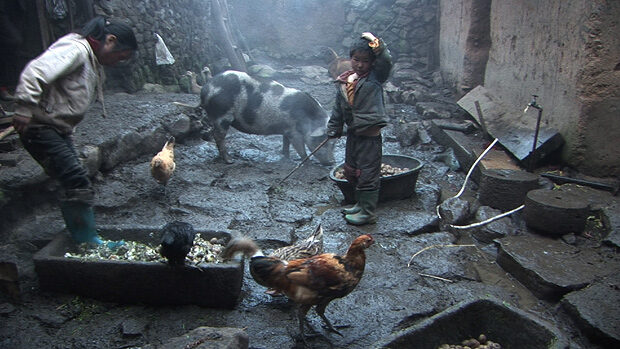 Wang Bing’s work is of capital importance. The most relevant documentary-filmmaker of the Sixth Genera tion, he’s been working in some sort of counter-history of the 20th and the early 21st centuries. His films insinuate and show a state of affairs and a genealogy. The Chinese economical boom, or the pleasures of a market-oriented Communism, may be able to accelerate the construction and modernization of a country which is too big, but millions of people get excluded from development and are radically left off the screen. This doesn’t happen in Wang’s films.

This time, Wang travels to the Yunnan province, to a town lost in the mountains. Cold is sharp, aridity evident. Wang follows the lives of three sisters: Yingying (10), Zhenzhen (6), and Fenfen (4). The three of them have different characteristics; but due to her age and the roles she must take, Yingying is the center of this dry and loving film. The girls’ father is practically absent because he must travel to work at a nearby city; the mother is definitely an absent figure —she abandoned them. The girls live practically alone and the fact their grandfather and aunt live a few yards away does little to change the harshness of their everyday life and the abandonment they live in. To survive is a permanent imperative for them, and childhood represents a utopian stage towards another world.

The observational register does not entail a distant or complacent glance here; Wang’s constant effort to keep the camera at a height matching the point of view of the girls is extraordinary. Taking care of sheep, picking potatoes and dung, weather conditions force Yingying to move fast permanently. At moments, Wang’s camera conveys the same kind of urgency as in a Dardenne Brothers’ film. Yingying could be Rosetta, but in the 12th century.

In a family party at a nearby village, someone will put words to Wang’s position, which can be read in his shots as if they were a manifesto. Just as the exponential development of a gigantic and insane economy, the famous “rural revival” is meant for just a few.