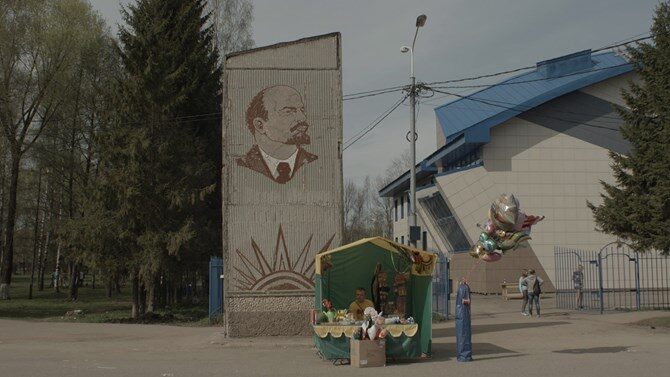 Don’t forget this name: Isabelle Tollenaere. His debut, Battles, is an ostensible political film based on keen observations.

Battles opens with a philosophical quote: «When the combat ceases, that which is does not disappear, but the world turns away.» It won’t be revealed, until the final credits, that the quoted philosopher is Martin Heidegger; this quote never works as an argument of authority but rather as a synthesis of what will happen, with no discursive mediation to explain the way shots are used in Battles.

Dividing her film in four chapters, «A Bomb,» «A Soldier,» «A Tank» and «A Bunker,» this young Belgian director — as she suggested during a Q&A session — managed, using that conceptual structure, to raise an «army of ghosts» and her idea is to study their concrete anatomy. There is a pervading intuition that war never ends, even when it has finished: war as material ruins scattered throughout the landscape, war as a naturalized and globalized fuzzy culture.

Each chapter takes place in a specific territory: scattered bunkers in Albania that have become corrals for cows; in Latvia, a group of civilians who decide to enroll in a military training camp for a few days; and meanwhile, in Belgium, the national army is busy collecting and detonating bombs still scattered throughout their territory. The film finds its apotheosis in its final section, when Tollenaere is busy observing the activities on a small Russian farm where inflatable war tanks, airplanes, and trucks are made; these sequences are juxtaposed with images of a national celebration where we can catch glimpses of a country fascinated by military aesthetics, a true warlike culture that is perhaps a sign of identity that goes well beyond the duration and end of the Soviet era.

The truly extraordinary thing here is that Tollenaere is able to make this warlike imaginary visible without using talking heads or texts to explain the images. The elegance of each sequence and the evident precision with which each shot is placed and combined are signs of a laborious shooting and editing process. The airplanes flying through the sky might fly backwards; a wide shot of clouds moving and transforming can be interrupted by the sudden apparition of a troop of skydivers; in the middle of the forest, a tanked-shaped balloon can irrupt perversely to tarnish the serenity of that environment and a snail can rest, gently, on top of an almost-archeological bomb. Tollenaere has a gift for an unclassifiable modality of suspense not without its dose of comedy. How to film war? In this essay, Tollenaere offers a lucid way to do it without turning snipers into heroes, or showing commandos laying entire villages to waste in faraway countries.

In few words, Snakeskin, by Daniel Hui, is a remarkable ludic essay; it can be seen as a heterodox documentary or as an observational Sci-Fi film. This is a magnificent piece of counter-history that charges against the myths, milestones and events that shape Singapore’s official history.

Hui outlines a disturbing genealogy of his country taking into account not only the landmark events of 1299, 1819, 1942 and 1959 —dates which mark the establishment of a kingdom, the British and Japanese invasions, and the Independence Declaration— but also imagining this country and reconstructing its history from a privileged point of view —a witness who is not seen but only heard and who is also a member of a mysterious sect with a recently-deceased leader. He is talking from year 2066 and he is the one who assigns an order to the visual matter of the film.

Singaporean multiculturalism (and multilingualism, though all the characters speak English) undoubtedly represents a dilemma in terms of the notion of national identity in a country with a population formed by Chinese, Indian and Malayan descendants. This is a psychological element Hui focuses on closely, in various different ways. An educational example of this is seen in the sequence where Hui goes over the history of cinema in Singapore, or when a Sikh sculptor analyzes the structures scattered in an old Chinese cemetery known as Bukit Brown.

The register, in general, is related to the poetics of observational documentary cinema. All public settings and the architectonical development have a textual and historic function. The panoramic shots over the Marina Bay Sands skyscraper and its crazy hanging pool are a symbol of Asian Capitalism, which is directly and indirectly deconstructed in the film through some testimonials identifiable by a face talking to the camera, as is the case of a young historian, a poet, and a former soldier who fought against the Japanese in his previous life and now is a cat. The general discourse in Snakeskin is articulated through oblique digressions that form a polyphonic rhetoric with a visual counterpart which is just as diverse and complex as what is being said.

Lav Diaz’s latest is observational too, but by no means is a Sci-FI film at all, although Storm Children –Book One- takes places in a devastated territory that could have been in any good catastrophe film genre.

Given the duration of this remarkable and heterodox observational documentary made by Lav Diaz about the immediate effects of the Yolanda Typhoon —which hit South-East Asia in 2013 causing over 6,000 fatal casualties in the provinces of Sámar and Leyte, in the Philippines— one could think this is a short film by Díaz; however, the 140 minutes of Storm Children, Book One are enough to visualize tragedy, helplessness, and resiliency.

The initial shots of flooded streets and a fast-flowing water channel right in the middle of the city of Tacloban become the first evidences of the typhoon’s aftermath. From then on, scenes of the results of this natural disaster will mix with shots of various situations in which children are playing in improvised street swimming pools, dividing garbage as it is being dragged by the current or unclogging sewers. Although most shots are static and absolutely precise in terms of the surface they cover sometimes the register changes and the camera moves in order to follow a character that “demands” it. At some point the children reminisce about the event and though this usually entails talking about affective and material losses, the victim’s austerity in their recount casts away any trace of verbose sentimentality. However, this is no impediment to feel the state of almost-cosmic orphanage in which the survivors, especially the children, live.

The immediate paradox is the vitality of these children who won’t stop playing and climbing on ships wrecked by the typhoon as if those involuntary ruins had become a post-apocalyptic amusement park. The semantic counterpoint for these sequences is when we see a 10-year-old boy carrying drinking water from a street faucet to his home. The presence of the State is never seen on screen, maybe to underscore its incompetence. However, the articulating point of view for the film is existential rather than political, closer to Life and Nothing More… than to When the Leeves Broke, other two remarkable films about the cruelty of nature.

Julian Radlmaier surrealist film, A Proletarian Winter’s Tale, is not observational too, but its keen observations on German imaginary political landscape is too real.

A German political comedy, critical of the current hegemonic economic policies in that country, with three Georgian protagonists —still in tune with the Marxist categories for interpreting History and their own consciousnesses— who must work as janitors cleaning the numerous rooms in a castle were an art exhibition is scheduled. Two artists, a Nigerian young man and a renowned minimalist from California, establish some sort of transatlantic dialogue to present a joint work with a central piece entitled “Floating Black Hole.” This is the general context of a playful, unclassifiable, and barefaced film. The hole in question is shown right from the start, and that is not the only oddity seen inside the castle (there is an even more bizarre episode involving a cloud).

Young German critic Patrick Holzapfel suggested this black circle somehow represents the lack of continuity and the disconnection between recent German filmmakers and the history of cinema both in their own country and in general. This implies a (un)conscious hostility towards working with the various forms of cinema. Here, Radlmaier chooses the 4:3 aspect ratio which leads to a careful conceptualization of human figure within space. Geometrical, obsessive framings and a tendency to use wide shots go hand in hand with a magnificent use of the depth of field. (See, at the beginning, the conversation between the butler and a domestic worker while one of the Georgians cleans the stairwell.). In other words, in this film politics are present not only in what is said verbally, but also in its formal language; that is, using form-related politics as a way of conveying a political statement.

But formal care does not imply lack of attention to narrative and though these three representatives of the underclass —clear signs of Capitalism in the 21st century— clean up and then simply vanish from sight of all participants in the event, Radlmaier presents three stories within the main story that send us back to times of St. Francis of Assisi, Stalin and Brezhnev.