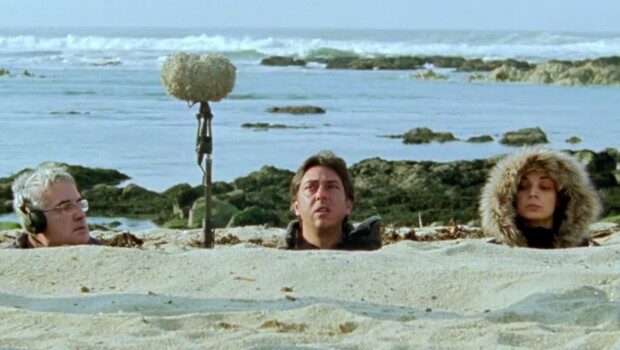 In A cara que mereces, Miguel Gomes’ first work, we witness the consequences of measles in a young man who is about to turn thirty—the second part of the film is an almost oneiric association of pretty delirious situations. The main character’s subconscious invokes seven of his Doppelgänger, which will inhabit his house and take care of him. What happens from then on transgresses any realist imperative one may want to pin on cinema. Another event selection system is put in motion and the focus of the interest is displaced to another modality for connecting the facts that consciousness is not prone to fixate into in its daily functioning.

Before Francisco—the protagonist of A cara que mereces —gets sick, he and his girlfriend take part in a theatre piece performed by children. Literally, he strolls around disguised as a cowboy, as if he were a Portuguese incarnation of Woody, from Toy Story. Measles, on the other hand, is not a sickness of grown men.

First postulate, or intuition to situate the cinema of Miguel Gomes: infancy is an age that transcends infancy itself, although it is in that concrete stage of one’s life where we learn to recognize the desire for fiction. What does that period consist of? In infancy it is possible to develop a certain perceptive and spiritual aptitude by which everything that is present in the world arouses interest and wonder. In the un- contradictable age of not knowing, asking implies a will to know that is mainly linked to storytelling.

In a minor but fundamental passage from As mil e uma noites: Volume 3, o encantado, Scheherazade meets Paddleman, a beautiful young man and sensible stud that has had more than 200 children. These potential lovers, having barely met, come across some children who start to formulate all kinds of questions. Paddleman’s children want to know about the origin of babies, the nature of the wind, the vigor of animals, and that which one doesn’t know about the world because it’s too far away. Scheherazade doesn’t answer scientifically, but through laconic and partial solutions in the form of a story. The scene is magnificent and in some measure synthetizes the intuition about infancy as an age of initiation into the habit of building stories. The scene also puts on record that this age is also the age to believe in beliefs. Meaning that believing in the world at that stage is easy; skepticism comes later in life. All of this can be seen in the first letter of Redemption, the chapter that matches the infancy of Pedro Passos Coelho, when he, as a child, feels desolate and writes to his absent parents.

What is fiction? What does making film fictions entails? Unlike literary fiction in which the word does not have to directly confront its reference—an operation that couldn’t be farther from cinema due to the fact that literary space goes without the presence of reality—Gomes preconizes for cinema a consubstantial and irreplaceable relation- ship between what we understand by fiction and by archive document. The fleeting evidence of that interpretation can be observed in a very pleasant sequence of As mil e uma noites: Volume 3, o encantado, when Scheherazade and her father con- verse detached from the ground in a Ferris wheel seat. They belong to a different century and are figures belonging to a pure universe of fiction, but the chosen context refers fully to the present and everything that can be seen behind them and in the background has little to do with them. This example, really, is a minor one, a circumstantial lead, for the extraordinary Aquele querido mês de agosto works on those elements in its own poetics of construction, what is said to be the documentary nature of fiction and its opposite affirmation at the same time—the fictional nature of reality. With that loving undertone that Gomes dedicates to every inhabitant of Arganil, the first part of the film is nothing else than the preparation of that film that is going to be shot and that will presumably be the film itself. Thus the second part will be the promised film, or something similar to what is previously described. The paradox is that this second part, curiously, will not be unlike the first. Here we have a certain virtuous circularity between the mere recording of reality and its ludic imitation.

Once more, what is fiction? One of Gomes’ char- acters in As mil e uma noites: Volume 1, o inquieto roams about inside the jaws of a whale with a minuscule torch in his hands. There, he will be tended by a doctor and her assistant, as if the inside of the immense animal was a clinic. In their conversation, the doctor says: “this powerful machine, that was paid for by the people and offered to you, is a storyteller. And it will tell the tale of your next days. It will tell it through registers of pulse acceleration, graphics of tachycardia, and synapsis of arrhythmias. And for the story to be less arid, you are going to write a description of your actions in a notebook”. Beyond the unlikely scenario and the metaphoric language the doctor uses to talk about an electrocardiogram, the metaphor can be reappropriated to liken fiction to a (popular) storytelling machine, perhaps with medicinal effects on the body, by which the patient or narrator, being able to redescribe and establish certain causalities between the different events of his life, conjures up the defenseless repetition of facts deprived of any teleology, as he does in the face of the harmful effect of the stories from those in power, devoid of ingenuity, that reduce a man’s life to his economic performance. That is why Gomes’ great political gesture in his recent trilogy on the Portuguese crisis is to vindicate fiction, the greatest adventure of sensible intelligence and irreplaceable remedy par excellence. The abandonment of fiction is a spiritual abdication as irreparable as the pauperization of work at all levels. Rage and imagination, document and fiction, here are the symbolic coordinates of As mil e uma noites.