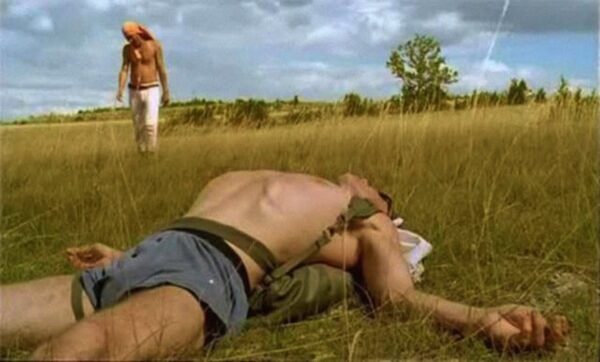 MES FICUNAM 2014 (27): CINEMA OF THE OUTSIDE: ON ALAIN GUIRAUDIE FILMS

Sunshine for the Scoundrels

It isn’t easy to film the wind. In scientific terms, the wind is “the compensation in the atmospheric pressure differences between two different points.” In cinematic terms, the wind is the phenomenon which defines, in metaphorical terms, the transactions be- tween the camera and the world. Bresson says: “to translate the invisible wind for the water which sculpts as it moves.” Some film- makers have dared to film the wind, and this has nothing to do with simulating wind using a huge fan. Filming the wind is a different thing; and, immediately, the film- maker faces a difficulty known as‘chance.’ For Joris Ivens, wind is a natural force which goes beyond the limits imposed by civilization, a cosmic breeze which crosses the earth; Ivens waited his whole life to film it, and he finally did manage to do so. In a recent interview made because of his film Stranger by the Lake, Guiraudie said: “Another interesting thing about that area in Provence is that besides being sunny all the time, it is the windiest area. I like having the wind as an element. It also contributes to the sensuality of this film.”

The King of Scape

What does it mean for a natural phenomenon to be transformed into a staging element? The key to answering this is clear; in Guiraudie’s films there is always some sort of struggle against claustrophobia. There aren’t many shots in close spaces, as if furniture would force all creatures to take refuge in a pre-established world. The unpredictable lovers of The King of Escape run away into the forest and everything is fine while they are outdoors; but, eventually, they’ll fall asleep in an empty shack and, precisely at that moment, their love spell ends. Fogo Lompla, the mysterious medieval warrior of Time Has Come prefers to sleep in the wild, without a sheltering roof over his head. Living in the open air is a modality of existence and he would only yield this to sleep with one of his two lovers, the one he has never had sex with. Even in a film set in a factory such as That Old Dream That Moves, the factory about to close its doors seems as a part of the environment surrounding it; it is an open and permeable factory, a place invaded by what lies outside of it and even the workers use parasols to be protected from the sun, as if they were in a spa.

In other words: in Guiraudie’s work wind is the physical and poetical verification of openness as the dominating element in his scenes. Open spaces are shown as a dimension of reality where everything can be reinvented: genders and genres, languages, desires, time. That is why Sunshine for the Poor is a paradigmatic film, just as it will happen later with Stranger by the Lake, Guiraudie’s master piece: these two films exist in open spaces, which are the condition for a possibility for the creators. That is why a great visual pleasure of Guiraudie’s films is watching his panoramic shots, a framing he seems to prefer for ending his films, as in the perfect finish of Time Has Come.

Stranger by the Lake

And from this starting point, everything becomes a matter for invention; detectives in Stranger by the Lake and No Rest for the Brave; social realism in That Old Dream That Moves; adventure in The King of Escape and Time Has Come. In this latter, as well as in Strength of Things and in Sunshine for the Poor, Guiraudie mixes two different times: the medieval and the modern; there is a damsel to be rescued, but also peasants need to be organized to make a revolution. By the way, Guiraudie has to be one of the less dogmatic Communist filmmakers in filmic history.

Finally, there is desire, sexual desire. Guiraudie stays away from a codification of homo- sexuality as an assertion of identity. Just as reality, identity (and language), and sexuality are plastic, polymorphic issues and that is why this director has such capacity to film casual sexual affairs at a gay nudist beach while at the same time he presents a friendship between a heterosexual and a homosexual in Stranger by the Lake. There is no deontology forcing homoeroticism, or its opposite, the so-called normative heterosexuality. Here, homosexuality is simply a legitimate path among others and that is why it becomes so universal and valid. What matters is experiencing sex with freedom, as it is proved at the end of The King of Escape.

Guiraudie’s poetics frees cinema from those formal and narrative constrictions which make so many films so similar. His movies are unique in a visual and sound ecosystem which tends to homogeneity. This filmmaker from the south of France,  too much of a proletarian for his contemporaries,  is one of the last independent filmmakers.