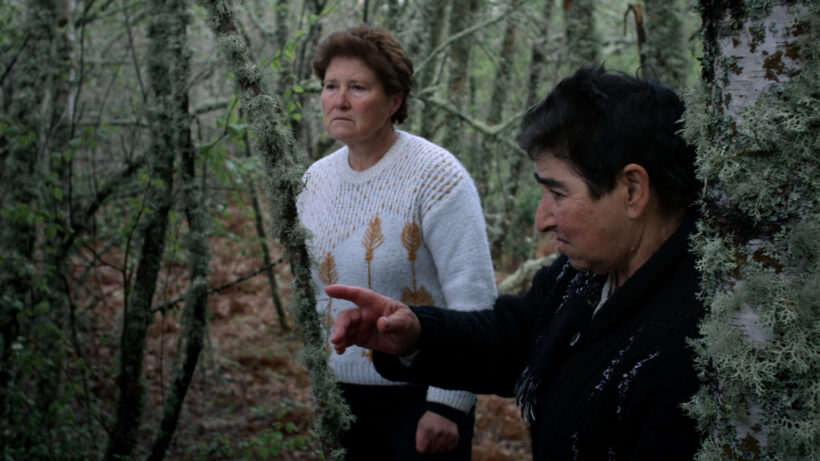 In principle, a film about matter and the transformations it undergoes according to the hazardous forms that constitute life. Matter as forest, rain, clouds, fire, cows, horses, sheep, and men, which constitutes, if you will excuse the repetition, the very subject matter in Eloy Enciso’s second film. How to film the relations amongst these material entities? How to frame and show a living ensemble?

The philosophical dilemma set at the beginning is precise: two women talk in the middle of a solitary forest. Are they old pre Socratic philosophers, tinged by a feminine spirit? It is more than evident that they wish to decipher the mystery in the relations between the one and the multiple, and the sense (or the nonsense) of those relations. Comicalness, absurdity, and uncertainty color the associative process of both women: here, philosophy is not incompatible with laughter. In just a few minutes and seven fixed shots, Arraianos already proposes a reading frame. What comes later is that first dialogue’s translation into images and sounds.

Enciso’s slight debt to the Straubs’ cinema is as evident as anecdotic, because the Galician filmmaker’s materialism is more vitalist than political, and reciting does not always predominate in what his characters’ say; the passage in which a couple of old women sing a love song belongs to another symbolic order, such as the obsession with the passing of time.

In this hybrid and unclassifiable film, the documentary nature (articulated through a 60s theater play: O bosque, by Marinhas del Valle) has as sole purpose —bearing witness to a life style in its twilight. Apart from a sewing machine and the wind mills (and some lines in the dialogue), the men and women that we see could be ghosts or be trapped in a limbo outside time, dislocated as well from a precise territorial belonging: the inhabitants of this lost town are not altogether from Galicia, nor from Portugal.

If Werner Herzog’s The Enigma of Kaspar Hauser fundamentally attempted to question that mysterious psyche which sets humans apart from animals, this new attempt at showing the mythical teenager found in the streets of Nuremberg in May, 1828, is full of love and parody, and seems to focus exclusively on cel- ebrating the joys of the flesh —it is because of laughter and speech that humans set themselves apart, but the trance experienced through dance is also another privilege of our species.

Dragged by the sea, Kaspar Hauser arrives to the Island of Sardinia. Is he dead? Is he an epiphany? Is he an alien? Instead of God’s messenger or a creature from outer space, Kaspar Hauser is shown as an ontologically alienated person who barely speaks or eats. The sheriff (Vincent Gallo) is moved by his mys- terious arrival and takes him under his wing, teaching him —among other things— how to be a good DJ. Later on, Kaspar Hauser wants to be knighted and to write his own biography. The Duchess of the island is suspicious about the origins of this new arrival and keeps her guard high. Her servant does nothing but to play soccer with a priest and satisfying his more immediate needs with the local hooker, as does a thug cowboy (also played by Gallo). Kaspar Hauser’s destiny is not bright and his alleged saintliness becomes a source of trouble.

The opening wide shot with a cowboy dressed in white moving as John Travolta in Saturday Night Fever to welcome three flying saucers should not confuse us. These are not lunatic ravings and a keen eye will be able to distinguish a clear theological interest. And though the mesmerizingly vital techno music by Vitalic has the overwhelming effect of making you want to move, to think is not interdicted. The formal elegance of the film can be seen in that sequence where the local priest measures his faith against a silent Kaspar, though this is not the only admirable sequence shot. A secret testimony of his love of cinema and an openly irreverent film, this fourth feature by Manuli is a film to be seen and danced to.

A dear friend’s death and an eclipse, an intimate topic and an astronomical event, two extraordinary phe- nomena linked by chance in a young filmmaker’s experience constitute the essential material for this deli- cate and perceptive first film with a little of remembrance, elegy, and spell.

Kees Brienen stages his whole lived experience and declares so at the beginning: “We were going to see an eclipse, and this is what happened”. His dear friend Jeroen died in some unknown place located in northern India. Brienen tries to confirm it, to look for the body, to understand the reasons of his death, and eventually to cremate the remains respecting the customs and rites of the country in which he died.

The sobriety and sweetness at the moment of rebuilding the (re)encounter with his friend’s body in some lost spot in Sikkim are admirable. The Buddhist context of the ceremony and the way in which it is recorded are distanced from a staggered gaze towards a religion commonly mystified in Western perception. The same happens with the austere curiosity with which Brienen shows the cityscapes and landscapes of an overpopulated country. This is a double journey, both internal and external: the one of the very director behind and in front of the camera, fictionalizing and universalizing his own despair and the mourning experi- ence afterwards, and a beautiful visual and auditory stroll through Calcutta, Sikkim, and Varanasi, that has little to do with tourism (or a travelogue) because Brienen honors a tradition that he knew from the begin- ning, since cinema can be a sensitive journey by other means. In this sense, the frames are fabulous: the precision in his shoots of the Howrah Bridge and other architectural structures, as well as his precision to convey the road experience in the Indian streets and routes through several subjective shots and the way he synthesizes the interaction between Indians and foreigners, all of these are ostensible virtues of this film.

The predictable spirituality of the movie is present in an unpredictable astronomical anomaly, followed by the electronic (and geometric) appropriation of a phenomenon as mysterious as it is fascinating.

The Legend of Kaspar Hauser belongs to Paths section, Ficunam 2013