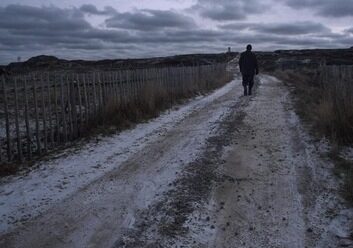 The titles of Yulene Olaizola’s films are a code. The intersection of two Mexico City streets named after two writers —Shakespeare and Victor Hugo— baptized her first film and that location was much more than just a place as any other, it defined the symbolic coordinate of an extraordinary and heterodox documentary feature. Once again, Paraísos artificiales features a specific topography (Los Tuxtlas, Veracruz), establishing a context and directing concept to show the possibility of her main character to recover from an addiction. The main thing in that fiction piece was local people and their experience, limited by an apparently paradisiacal nature nonetheless indifferent to human wellbeing. Then, in Fogo —the name of an island northwest from Newfoundland, Canada—the chosen territory is once again the guide for a set of scenes and a minimalistic but universal tale. Olaizola, as any good architect, is first of all a good interpreter of territories, upon which she writes, and films, and builds.

The first three shots allow the visualization of an ecosystem, a surface, a habitat. A few moments later, a man knocks the door at a house and announces: “The last ferry is leaving tomorrow.” In less than ten minutes, we know it all. As other inhabitants in Fogo, Norm has to take the decision of leaving or staying. Surviving in the island is clearly not an easy task. The houses seem to crush under the force of gravity and atmospheric conditions are harsh; to build up an economy seems impossible under those circumstances. And though men there live in some sort of cero-decree of existence, the sense of belonging and being rooted holds more power than the idea of a possible migration to an easier world. Olaizola simply registers the noble resistance of local people.

And then there is that almost-empty island; the secret, ever-present, and lonely star of the film: a geography which is essential for literature and film, a dialectic backside to civilization, a place where men think they can start over, or simply face the bareness of their origins and their destiny.

This review belongs to Ficunam 2013 catalogue