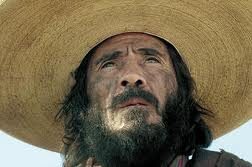 At the beginning there is only darkness: a voice over, the distinct sonority of a man who has certainly lived for a long time; a survivor of the Cristero War fought at the end of the second decade of the 20th century. The voice sums up the July-12th, 1926, “Manifest to the Nation”: religion and all religious practices are forbidden and demanding the right to a (Christian) faith can lead to one’s death.

This is the context of Matías Meyer’s third film. The (pre)text is simply to follow the resistance of those last soldiers of Christ, to watch their everyday lives and deprivations as they runaway from a shoot out, sleep in caves, sing, confess their sins to a priest and also, every once in a while, even doubt about carrying on with their duty and obeying vertical orders to give up to the mundane and horizontal desire of staying with the women and children they left behind.

The contemplative tone chosen by Meyer could seem inadequate for a war film, or even a theological western, but this young director secretly wages his own formal war against a film aesthetic that seems to take speed as an article of faith. Indeed, the three films made so far by Meyer favor sensorial observation: a bullet in the head of a fighter not only allows Coronel Florencio to dwell on the love of the Almighty but it also offers us a subjective shot from the point of view of the wounded combatant, from the tree tops. Meyer is inflexible in educating perceptions through his films and that’s why he includes those superb low-angle shots of men eating out in the wild, under a star-filled sky. Here, carefully watching is a must. The sidewise travelling shots, from right to left and always with a trumpet as sound support, are simply glorious. That’s how we follow the endless pilgrimage of the combatants.

However, it might be that the whole film is but a pretext for its last minutes and just as sunflowers turn to follow the light of the sun, all the shots push the narrative forward and are oriented towards that moment of grace that crowns the film. If there’s a common search in the three films made so far by this young director is that into the experience of male sensitive pleasure. Semi-naked soldiers enjoy the fruits of nature while a quiet stream and a few rocks are enough to give us a glimpse of paradise.

In recent New Independent Mexican Cinema there are a few films that share similar conceptual and aesthetic interests. Alicia, vete más lejos, Wadley, and now, Ánima, advance the idea of travelling as a way into an identity search. And yes, to travel implies becoming a different self, to rewrite oneself in another time and another space. It is a way to realize how our belonging constitutes a self while distance and estrangement deconstruct and reconstruct it. Is the self a palimpsest? At the same time, filmmakers such as Marta Trujillo, Matías Meyer and Antón Terni understand that this interest on the variable essence of the self and its contingencies entails a search for cinema language: the anecdote is secondary to an experimentation with the sensory order, and its visual translation becomes the main concern in this form of register, the main reason for this film act.

Pablo, the young protagonist, travels to the desert (San Luis Potosí) without really knowing what he is looking for. However, he does know what he is (subjectively) to begin with. He confesses his egocentrism and laziness. He declares he is possessive and self-pitying; “I’m a mediocre searcher of truth and I greatly lack faith,” as he says. During his journey, he will meet an orphaned child who will join him and at a certain point he will also meet a shaman who stays out of frame most of the time and who offers a few elemental and trivial teachings.

However, Ánima is not a film to be interpreted but experienced. Since the heat of the desert affects the protagonist’s consciousness, Terni tries to materialize his protagonist’s delirious and dreamlike perception: a woman, naked but for a mask, animals and plants as mysterious presences, the primitive overflowing Pablo’s consciousness; all of the above, interspersed with childhood memories, are the elements Terni uses to combine and render effectiveness to a collage of images and sounds that represents an specific psychic experience that —in the own terms of the film— reminds us of an undefined spiritual search.

The register offered by the 8mm and 16mm film is widely used by the Uruguayan filmmaker allowing him an ideal texture for his aesthetic aims and even reaching narrative pertinence in a sequence when the main character and the kid play together (filming and running after each other) among some ruins.