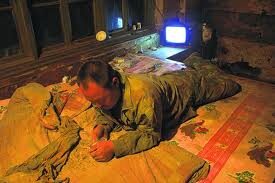 In “Bearing Witness,” introductory chapter to The Urban Generation —collective book that sheds light over the cinema of the Sixth Generation— Zhang Zhen puts forward two terms that help to articulate the politics and poetics of these new Chinese filmmakers: zhuanxing (“transformation”) and xianchang (“in the scene”). The first concept denotes the economic, social, and even geological mutations experimented by Chinese people in the 21st century; the second tries to explain a distinct method of staging where processes of the present are captured in a way beyond the standard division between documentary and fiction or professional and amateur films. This formal procedure involves the inclusion of regular folk as protagonists, which means that their right to produce images registering their own lives is claimed. This feature by Yu, his third, is set in the Changbai Mountains, in the northern province of Heilongjiang. The main character, San Liangzi, is a lonely lumberjack who works not only as a woodcutter but basically in any job he can get. There, to survive is a full-time job. The only promise to rise above an inclement weather and precarious economic situation is that of conquering 29-year-old Wei Meizi, 16 years his junior. His love seems made of steel; without many positive signs from her chosen one, he’s been attempting to seduce her for ten years as she is one of the few women still remaining in an area where most migrate to the cities. San does everything to surmount her indifference: he helps her with her new ecotourism venture, cuts wood and makes fire. He is not willing to give up or to satisfy his most basic instincts with prostitutes; and he is even less willing to buy a wife for himself (a North-Korean native) as many other local men —men who also suspect Wie is a lesbian— do. Yu finds “fiction” in the heart of a documentary register and links it to a broader context. Evidently, an economic system is expelling villagers into cities which though never shown in frame are the irresistible force of attraction responsible for these villagers left without women. A domestic and macroeconomic drama registered with great care is also a prodigious portrait of the loneliness of men. To watch San walking under the light of a candle, or just before falling asleep, shows us the infinite loneliness lived by a great silent majority.

This encapsulated review has been publish in Ficunam 2012 (Catalogue)