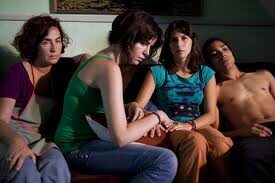 Inner-city Lisbon, a young man with dreadlocks, Joca, walks as if his movements were channeling a hip- hop rhythm. He is on his way to a dealer’s house to let him know he’s just had an accident —he was robbed and some 10,000 Euros of their raw material (cocaine) were lost. The thug questions him about this and believes his story —he’ll be forgiven, but he must pay. Their whole talk and negotiation is shown through a static, very-well planned middle shot for which João Canijo uses to great advantage the place from where the framing is conceptualized in order to work with both the focus range and the boundaries of the shot. The expansion of the framing, a decision not to fix a precisely defined center and to favor instead the periphery of the shot is a strategy repeated in several occasions; his mother, aunt and sister (and her boy- friend) argue in the kitchen of the family house. As the talk develops, the movements of the characters in the various rooms of the house can be perceived with practically no movement of the camera.However, this is not a Mannerist affection and the mise-en-scène manages to convey an organic whole, as if entitling us to a voyeuristic experience, a ghost-like position from where to spy on a specific institution —family. A melodrama and precise sociological portrait in its essence, this film works in its own terms with widely known narrative outlines: an unpredictable oedipal love; the points of encounter and the distinguishing factors among social classes; precarious, illegal economies; all of these constitute the symbolic materials that make up the tale. The decisions on the format, together with the strong performances by all the cast members, denaturalize melodrama to transform it into a contemporary tragedy not without a political reading that hints at a violence and social deprivation not often seen in European cinema.

This film belongs to Traces section.

This review has been published by Ficunam 2012 (Catalogue)