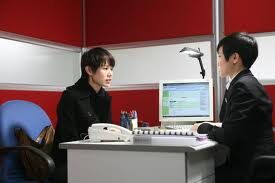 Few hours after the 2008 Greek crisis is announced, a bank employee, a gangster, and a cop share their lack of immunity in face of the macroeconomic factors that determine our everyday life and behavior; but, apart from that, their stories barely intertwine. Teresa’s job is in peril and she has to convince her clients to gamble on some high-risk investment she hardly believes in; Panther organizes parties and everyday activities for his Mafioso boss while also taking care of the debt one his brothers has to other thugs; detective Cheung tries to solve a minor homicide while also trying to sort out where to live with his wife, who dreams about moving into a new luxury apartment. And even though these are the main protagonists, all the characters have something to say: a young mobster contextualizes economic Darwinism, an old worker ready to explode a gas can inside an elevator is the living proof of the effects of the socioeconomic transformations in the region, an old lady sums up in a mantra the desire shared by many and the behavioral matrix of all: “I want more money.” To hide his own virtues is the trait of a master; often described as a choreographer of space and a genre author, Johnnie To is one of the most relevant filmmakers still in active. With a classic narration and a modern cinematography, in Life Without Principle To is able to combine three cop stories not without humor and to offer several remarkable sequences while also obliquely portraying the deity, visible and invincible, with the larger number of followers: money. Johnnie To is no Bresson (Money) nor a Dardenne (Lorna’s Silence); but as they did, he also suggests money is a substantial definer of contemporary subjectivity; however, To is less metaphysical than the French and more structural than the Belgium brothers, and the relation between the subjects and the system is much more evident, specially because Life Without Principle shows in great precision the existing relations between national economies, global speculation, and intimacy. At the end fate will favor the weak, but only because To’s love for his creatures seems inversely proportional to the ruthless cruelty of a social system so brilliantly and elegantly portrayed by the director.

It isn’t necessary to have seen neither Cold Fish nor Love Exposure in order to follow this closing film of the “Hatred trilogy” by Sion Sono. Guilty of Romance could be interpreted as a delirious and corrosive presentation of the dialectic confrontation between two opposing and yet structural forces of our psyche; let’s call them Eros and Thanatos, in a Japanese key. The central theme of the film is not hate or love, but repression as the modus operandi of Japanese culture. Detective Kazuko tries to solve a brutal murder that happened in Tokyo’s Red-Light District. At the beginning of each of the film’s five chapters Sono advances the state of the investigation and then reconstructs —through heterodox flashbacks— the story of the victim, Mitsuko (professor of literature at a elitist university by day and prostitute by night), and her disciple, Izumi, the obedient wife of a famous novelist who little by little becomes a prostitute. Izumi is actually trying to reinvent herself and the one thing she is truly fascinated by is her sexual guru’s knowledge of Tamura Ryuichi’s poetry, whose poem “The Way Home” is spiritually present throughout the whole tale. Is this a voluptuous deconstruction of the traditions? Izumi’s homely rituals and an extraordinary sequence in which Mitsuko visits her mother together with Izumi and a pimp synthesize the social customs and the double morality which organizes them: an obsession for purity and neatness are the reverse of perversion. The acting performances are glorious and the furious and astounding editing is only sporadically slowed down by the musical chords of Marais and Mahler. Sono suggests that sex and language form the base of identity, and their rigid and extreme codification within Japanese culture is always a source for malaise.

Both films belong to Traces section.

Both texts have been published by Ficunam catalogue 2012.