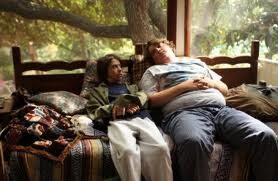 This new film by Azazel Jacobs, son of the brilliant Ken Jacobs, shows that not everything is lost for renowned American indie cinema though it might sometimes seem to drift from its mumblecore variety to a complete absorption into a representational system hard to differentiate from mainstream cinema. Terri is a rare gem, and its theme is precisely the legitimacy of weirdness. Its main character is an obese teenager who lives with his medicated uncle, goes to school in pajamas and spends his free time hunting rats to feed other animals. Obviously, he is bullied by almost everyone at school. But this is no impediment for a beautiful, liberal and lonely girl in his class to feel a keen interest for him. Terri will also become one of the protégés of some sort of academic counselor interpreted by John C. Reilly, another weirdo who is slightly more assimilated to the (educative) system and screams too much, but who also stays by the side of a group of students who would make a perfect cast for a remake of Freaks, trying to help them. The mystery behind Terri lays in its universality; it is as if, through his characters, Jacobs had detected the various modes of eccentricity, a recognizable and partially empty structure which anyone could use to express their weirdness and lack of connection. Jacobs doesn’t film weird people from a distance or with the cynical and detached interest an entomologist has for his specimen of study, his portrait itself is part of that weirdness and his camera participates in it lovingly. Terri is a cry against normalization, though the loneliness of its creatures might not be altogether insurmountable.

Teenage world is not precisely “the best of all possible worlds,” a concept which reminds us of Leibniz’ Theodicy, mentioned in a Philosophy class in Camille’s high school at a particular moment when she just couldn’t care less about the metaphysics of the creator of infinitesimal calculus. Her first love —beautiful Sullivan, a bit older than she is— went away in a trip to South America with a friend. But though a modality of a rite of passage the trip might be understandable it is definitely incompatible with staying in a love relation. At first, they find a solution in their letter exchange but at a certain point news stop arriving from the Latin-American continent (the film is set in 1999 and e-mail has not yet supplanted letters). Before the trip, Camille issues a warning —if he leaves her, she will throw herself into the Seine River. The chosen method will end up being different; but as the many fades to black suggest, it will also mark the beginning of a new stage in her life. Camille will work and study and for a while we’ll find out nothing more about Sullivan’s whereabouts. And it is not by chance that Camille ends up studying Architecture and that her professor from Denmark, Lorenz, associates the essence of this discipline with memory; nor that further on they’ll get together in spite of their age difference. The dramatic tension, of course, is no other than the possibility of a reencounter between Sullivan and Camille. However, Mia Hansen-Løve is not particularly interested in this and though at a first glance Un Amour de jeunesse shows a teenage-love story with a precise point of view (and a conscious one, as suggested by the lyrics and the title of the song “Volver a los 17,” heard at the beginning of the film), she is more concerned with the secret reconstruction of an architectonic experience which has little to do with buildings and houses and a lot to do with the building of the self. And in that respect, Camille’s passage from high school to college is extraordinary and luminous. In just a few minutes, Hansen-Løve —who declared her film as semi-autobiographical— synthesizes the edifying and liberating power of knowledge and shows journeys —both Sullivan’s (his letters show a process of learning) or even Camille’s (Lorenz’ classes are also a form of travelling for her)— as an epistemological and existential dive. The smooth flow of the narration, the cleaver ways for marking the passage of time, the solid interpretation of the (three) lovers, the intelligent depiction of Paris and Marseille, and the paradoxical lightness and depth in the portray of an intimate and singular experience keep this film well away from common places, which are out there lurking but Hansen-Løve is able to avert them with a knowledge granted through direct experience and her talent, placed in service of the mise en scène.

The first feature film by Santiago Mitre might well be a turning point for the so-called New Argentinean Cinema. First of all, its maximalist and fluid plot shows a clear will to tell a story and find the model to do so. A young man from the Argentinean countryside begins assisting to college (perhaps studying political science at the UBA-University of Buenos Aires). However, he’ll end up being more involved in (university) politics than in his studies; particularly after becoming the main aid to a professor who aspires to be the dean of the university (and also after becoming the boyfriend of one of his female teachers). Mitre records the character’s learning process and its effects on his clothing and corporal gestures. Secondly, The Student chooses the road less travelled by a generation of young filmmakers: politics. This is a political film not because of its direct discourse; Marx and Rousseau are discussed together with socialism and revolution, as well as a long-past betrayal within the UCR (Civic Radical Union, a political party) dating back to the 19th century, and Capitalism as the system responsible for all the evils of this world. But that’s not the core of its political discourse. Mitre rightly chooses to film ‘power’ not as a substance, but as a relation system informing all the levels of exchange within an institution devoted to knowledge.

The opening travelling shot of a landscape, taken from a moving car, shares a same ineluctable destiny with all mortals; off-screen, a car accident is confirmed by tire marks on the pavement. About the driver, we’ll only get to know —and tardily for that matter— that he enjoyed hunting and wore a ring. That’s just a glimpse, an example of Velázquez’ courage in choosing ellipsis and hints over highlighting the anecdote and using words that name, explain and contextualize. The director seems to fully believe in his images, in the gestures of those four characters living the un- stable and uncertain phase known as teenage years; a time when one begins –without many symbolical tools to do so— to share the intuition that forlornness is not just the result of a loss, but a perennial state of mind which defines to a great extent the way we pass through our lives. Thus, while a kid is mourning his father’s death, Rebecca, who studies high school in a religious school, needs to know for sure if she is pregnant. Meanwhile, two other teenagers —not far from entering the adult world— manage a fish-boat rental business, ride a motorcycle and apparently their only worry is to spend their present time pleasantly. Although the film is set in Salamanca and the Tormes River is a fifth protagonist to the story, this is clearly a universal tale with a minimalist discourse in relation to film language and a maximalist formal work. The loneliness felt by the characters, together with an almost complete absence of grownups, goes beyond cultural ascriptions and that’s why nature and living creatures with their sounds (the true soundtrack of the film) are of central importance. The long shots of a forest and one of the youngsters walking through it help to convey the perception and feelings of this character and are a clear sign of the formal awareness of a director able to frame a lunch by the river from the interior of a room as if it were a perfect naturalistic painting. It is not needed to be an expert in hermeneutics to decipher the title of this film, but in order to look deeply beyond its surface it is necessary to reawake (or to recover) a sensibility atrophied and spurned by a dominant contemporary cinema that would rather indulge in a sensorial orgy of fast images and roaring sounds.

Except Terri, there rest of the films belong to the Official International Competition 2012