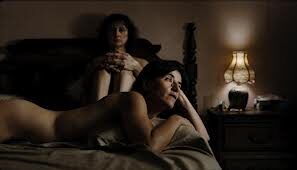 Although an animal is mentioned in the title and though Denis Côté’s most recent film, Bestiaire, is an extraordinaire essay on a zoo, the only animals to be seen in his new film are a couple of sea creatures at an aquarium.

Actually, Vic and Flo Saw a Bear is a dry study on the nature of man, an animal among others who is capable of shivering with a line of poetry and to find satisfaction in an act of revenge. Always interested in characters not quite assimilated into social order, here Côté chooses to tell in his own terms a love- detective story.

61-year-old Vic just came out from jail, she is not a free woman because she was sentenced for life, but she can serve her time in her own house. She chooses an old family house near some woods; a remarkably quiet place, at least apparently. Her uncle still lives there, a man with diabetes who cannot move or talk. His presence in the film seems insignificant, but it turns to be one of the many elements with which Côté builds his narration and portrait of human experience. After some days, Flo will come to visit her and possibly to stay with her too. She is younger and not quite a lesbian, because she has sex with men every once in a while. Vic is afraid Flo will leave her forever one day. No visitors ever arrive to that open-air prison except for the officer in charge of confirming Vic’s “progress,” and a 50-year-old woman with a gentle face. The human qualities of these characters represent the whole spectrum of our behaviors: kindness, understanding, brutality, perversion.

Côté’s clear filmic elegance is there to be seen in the only flashback of the film, used to indicate a feeling and an association of Vic while living a soothing experience, as well as in the great travelling shots opening several different scenes as well as the closing shot of the film; a more mainstream Côté, but as loyal as ever to his convictions and obsessions.